What is Spike Grill?

It is a regular electric grill with the cooking plate featuring spikes.Note the words – “Spike Express Grill”. Spike – since the cooking surface has metal spikes that poke the food for better cooking. “Express” – because it supposedly cooks faster than an ordinary electric grill.

Food cooked on the gas grill is savory, but it takes a lot of time to cook the food on the grill. Grills can also be messy with all the food sticking to the surface. The electric countertop grills are convenient but don’t have the savor that the gas grills infuse. The Granitestone Spike Express Grill claims to be the world’s first grill that has spikes on the surface that makes your food cook faster than the ordinary electric grills. 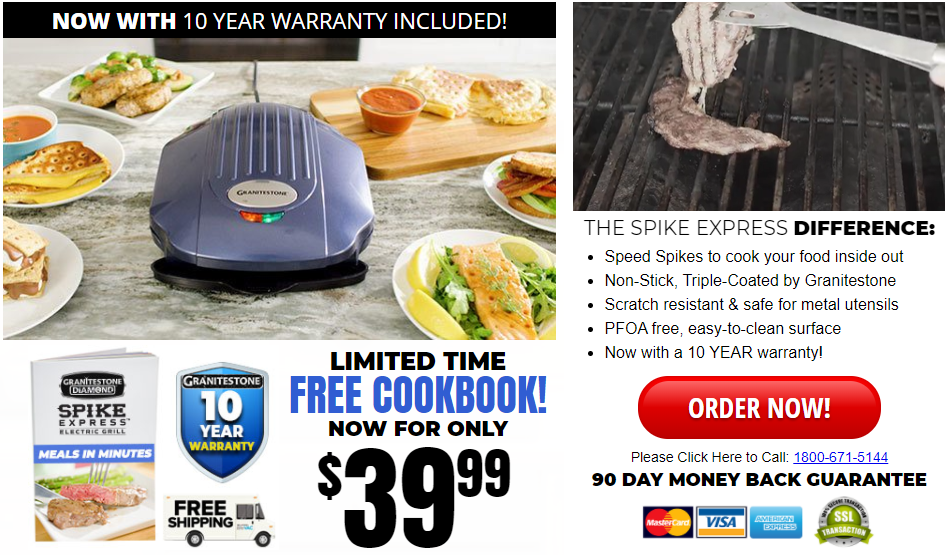 How does Spike Express Grill work?

What does it cook and how fast?

Where to buy the Spike Express Grill?

The Spike Express Grill is available only at the official website BuySpikeGrill.com for $39.99 + Free Shipping. The offer is backed by 90-day money back guarantee.

Do the SPIKES Really Help?

Nope, poking holes in the chicken is not a good idea as it would drain the juices from the chicken. Our product reviewers write to us that the poking would cause the chicken to lose the flavor and the juice. Had the poking method really worked, it would have been already in use. The fact that not many people poke the chicken before grilling it implies that this spike method does not work. In fact it makes the surface of the food look craggy. Marinating and not poking makes the chicken cook faster. Based on the review we do not recommend using the Spike Express Grill to cook chicken wings.

While making Hamburgers with the Spike Express Grill, you need to preheat the spike grill to 375 to 450 degree Fahrenheit. The burgers should be cooked at an internal temperature of 155 to 160 Fahrenheit. But most experts suggest electric grills are not the best option for making burgers as the patties dry out inside the grill.

Is it possible to cook without oil butter in the Spike Express Grill?

Anything to the Granitestone?

Nothing. It is just the finishing and not actual Granite stone. It offers no additional value. There are already reviews of the Granite Stone cookware being “sticky”. There are also complaints about the so-called granite-stone finishing peeling off after moderate use. The promoters can claim anything but you cannot use metal utensils on the non-stick cooking surface of the grilling surface, that will cause the coating to peel-off. The promoters of Spike Express Grill are making false claims related to these features.

The Spike Express Grill is to be cleaned everyday after the use. Use a grill cleaning brush. Use a rubber spatula to remove the food stuck to the surface, don’t use metal spatula. Since this grill has a lot of spikes, food sticks around the spikes and removing it is a task. Using a damp cloth soaked in soap water is also a good method to remove the tough stains. Use a dry paper towel to dry the grilling surface, I know the paper is going to be poked by the spikes that’s fine. You can place a few papers on the surface and close the grill for some time. The towels will absorb all the moisture left. More Electric Grill Cleaning tips here, “and here“.

The Spike Express Grill inherits the Drawbacks of Electric Grill

Electric grills are not the best cooking appliance, they are a sort of adjustment, trade-off between taste and convenience. The Spike Grill is still a small countertop electric grill so no matter what, the food cooked in the Spike Grill does not taste like the one from the outdoor gas grill. You don’t get the authentic barbecue flavor. The electric grills do not really sear the food.

What are the Advantages of the Spike Express Grill?

The Spike Grill has all the advantages of an electric grill. It is smoke-free, convenient to use, produces less mess compared to a gas grill and is well suited for a single person or two. It is much cheaper than other branded grills like Hamilton Beach, Cuisinart, PowerXL, Ninja and the likes. The biggest advantages of the Spike Express Grill is the 10-year warranty.

The fat collection container comes in handy. Unlike other electric grills that have fat collection tray right under the cooking surface, the Spike Express Grill has it outside. This makes collecting the grease much easy. With the spikes you should expect more liquid coming out than normal.

Be the first to comment on "Spike Express Grill Review | BuySpikeGrill.com Review"