How does Shaq Egg Maker work? 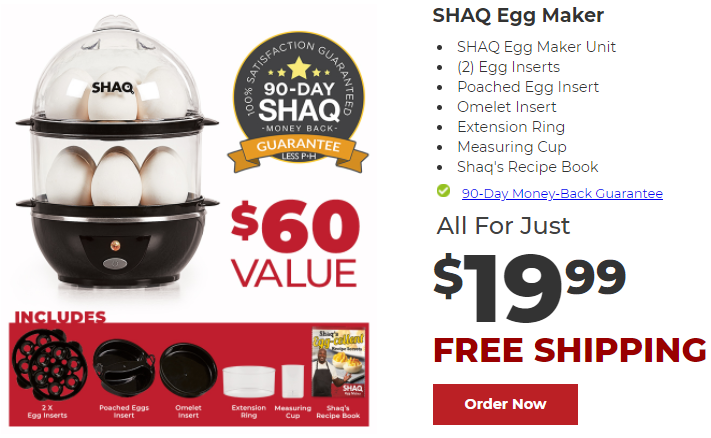 Measuring Cup – The Shaq Egg Maker comes with a pre-marked measuring cup, just choose the type of egg you want to cook [Hard, Medium, Soft] and fill the water to that mark. 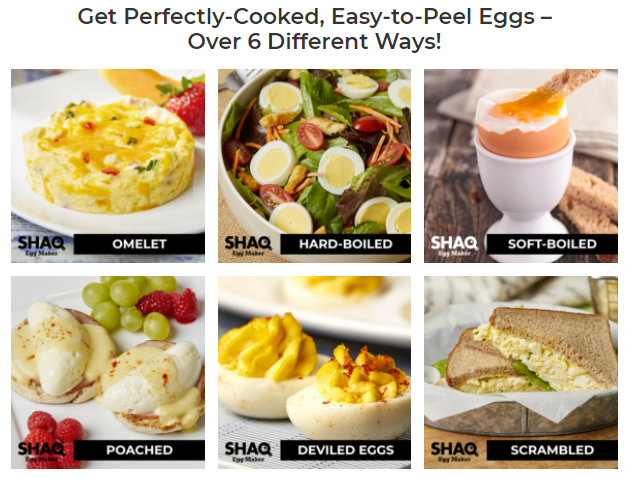 It is priced at $19.99 and is available ONLY at the official website ShaqEggMaker.com. The Shaq Egg Maker kit includes: 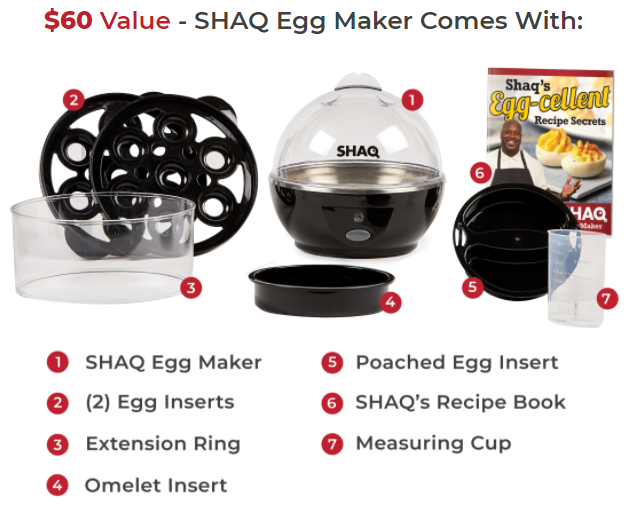 The Science Behind the Shaq Egg Cooker

The Shaq Egg Cooker features an heating element [electric coil] which heats the water in the boiling insert. The water turns into steam and occupies more volume than water. The steam condenses on the relatively cooler surface of the eggs, facilitating heat transfer. The condensed steam makes it back to the insert only to be converted back to steam. The steam transfers the heat to the eggs and also the extra volume builds pressure on the eggs causing them to sink in the water. The all these factors help to cook the eggs faster. The built in thermostat shuts off the egg cooker after about 10 minutes.

Not all is hunky dory with the Shaq Egg Cooker. Though the egg cooker works fairly well, there are complaints that the build quality of the Shaq Egg Cooker is not the best and feels very cheap. The egg cooker is very light, it features all plastic construction and many users feel that it is not something that would last long. Unlike other egg cookers, the SHAQ is quite bulky and has too many parts to clean and take care of.

The eggs cooked in the SHAQ cooker are difficult to peel. One SHAQ Egg Cooker review mentions, “The Shaq Egg Cooker does not make hard boiled eggs, the eggs are soft in the middle.” The trick is to steam the eggs on just one deck of egg insert [7 eggs]. But even then the results are not very “hard”. Don’t expect chef quality eggs with the Shaq Egg Cooker, steaming the eggs is always going to be inferior to boiling.

The dome of the Shaq Egg Cooker is somewhat inconvenient to use, the small handle is very smooth and is difficult to grab with your thumb and index finger. It should have a ridge or a knob for secure grip.

You can soft-boil only seven eggs and not fourteen as claimed in the official website [ShaqEggCooker.com]. Many reviewers feel that this is a sort of deceptive marketing from SHAQ.

Another shortcoming of the Shaq Egg Cooker is that it lacks indicators [sound or visual] which tell you the eggs are cooked. Many user reviews mention that there should be a beep that would indicate the cooking is complete. Though the Shaq Egg Cooker has auto-shut off, the cooker continues to over-cook the eggs, scorching them if you don’t remove them from the cooker in time. The water evaporates pretty fast so you have to remove the eggs immediately after the cooking cycle is over, or else the eggs get scorched.

Our Verdict on Shaq Egg Cooker

It does the job and is very easy and simple to use. Though omelets are not the best, poached eggs certainly are. But there is nothing special about the SHAQ Egg Cooker, it is just like any other egg cooker. We do not recommend the Shaq Egg Cooker because there are better alternatives out there. Shaq is not the only electric egg cooker out there in the market, there are plenty of them. We personally recommend the Chefman Electric Egg Cooker Boiler or the DASH Egg Cooker.