What is the Power XL Turbo Air Fryer?

A first of its kind in the world, the Power XL is a jumbo size air fryer that is supposed to practically cook any meal be it large or small. This wonderful six in one turbo air fryer features an extra sized inbuilt fan for extra precision with blades that are angled and engineered for rotations as fast as 3700 per minute (RPM). 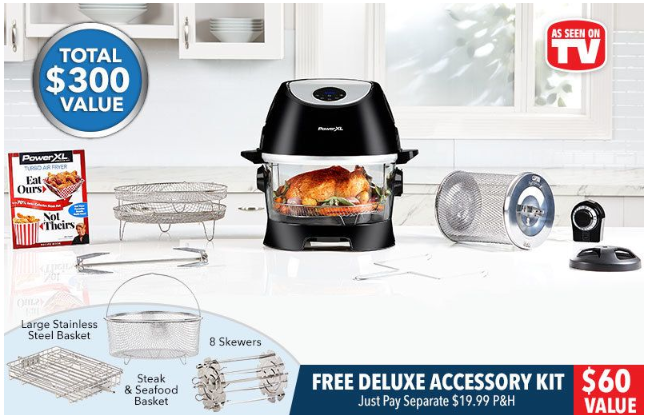 What does Power XL Turbo Fryer do?

Plan to save calories? Want to maintain a healthy lifestyle? This is exactly how this PowerXL Turbo Fryer comes into play. Whether it is an onion dish, fish and chips or chicken & fries the Power XL turbo fryer reduces calories like never before. It has the capacity to cook over 80% more food as compared to the traditional air fryers. The turbo fryer does the job of six different products all in a single go with a family size capacity and enabled with one touch cooking so one can watch the meals cook to perfection.

How does the PowerXL Turbo Fryer work ?

What it does is that it creates a sort of whirlwind of high velocity turbo-charged air which then passes through the revolutionary heating element. This results in a super-heated environment that is required for the perfect extra golden-fried crunch and crisp one aims for. Basically it’s an air fryer and so much more.

This air fryer as seen on tv has the potential to air fry, dehydrate, bake, broil, roast and so much more for your loved ones. The XL turbo fryer comes with an additional rotating fry basket, 3 stackable stainless steel air flow racks, a rotisserie spit and holder as well as a special Eric’s recipe book. By creating a whirlwind internally with a high velocity turbo charger a heating technology works its magic and cooks the food to perfection giving it the desired crust and taste. It has a 1700 watt power and is very versatile when it comes to healthy cooking with 6 pre-set smart buttons. It also has an easy to read user friendly digital touch screen with multiple attachments and an XL 10 Qt. capacity.

“70% less calories” – Well there is no independent test that attests the claim that the food cooked with Power XL Turbo Fryer has precisely 70% less calories but all we can say is that it has less oil.Verdict – claim is somewhat true.

Gold N Crispy – The reviews don’t agree with this claim. The air frying method of the Power XL Turbo Fryer does not make your food gold and crispy like deep-frying would make. Verdict – false claim.

Cooks 80% More Food than traditional air fryer – Yes this is true, since the Power XL Turbo Fryer is much bigger than the air fryers out there in the market. Verdict – claim is true.

10 quart capacity means you can air fry a 14 lb turkey – But first you need to fit the 14 lbs turkey in the bowl of the Turbo Fryer, too far-fetched claim. Don’t believe it. Verdict – false claim.

Huge Pork Crown roast cooked to perfection – Provided you keep a close watch on the pork being cooked. You cannot focus on any other task.

Revolutionary Heating Element – Nothing out of the ordinary, sounds more like a marketing ploy.

Rapid Air TechnologyJust a fancy name given to the convection cooking fan. Nothing special about it.

Crispier on the outside and juicier in the inside – Certainly not. Checkout the reviews.

The Power XL is named Turbo Fryer because the manufacturer claims that it is the first “Family Sized” air fryer. All the previous models are limited to 5 quarts, there are very few 10 qt air fryers and the Power XL rides on this feature to make it sound as a big and powerful air fryer, hence the name TURBO. But reviews reveal that making an air fryer defeats the purpose of cooking food quick. Reviews reveal that the thumb-rule is that air fryers (or TURBO fryer in this case) are food for cooking for one or two people, it is just not suited for a family.

Some reviewers mention that it is just fine if you have to healthy cook without bothering much about the taste of the food. But the Turbo Fryer gives out a lot of smoke which fills the kitchen.

Many reviewers mention that the PowerXL Turbo Fryer gives out a lot of plastic smell when it cooks food.

Taste of the Food

No matter what kind of food you cook in the Power XL Turbo Fryer, it tastes bland – almost all the reviews confirm this fact. Air Fried food not necessarily cooked in the Turbo Fryer, does not taste like “fried” you just cant’ get that flavor. So don’t believe all those juice chicken roasts shown in the TV ad. One Turbo Fryer user tried french fries made from fresh potatoes and they were awful.  One user says in his review that whatever you cook with this TURBO FRYER is not at all crispy but more like soy paper or sushi.

Not Better than a Griddle

One reviewer mentions in his comment that the Power XL Turbo Fryer cannot replace a griddle. It (the Turbo Fryer) takes the same amount of time that a griddle would take. Does not add any value. In-fact it does not fry as good as a griddle would do.

This another common complain among the Power XL Turbo Fryer users. You either don’t cook or over cook the food, many people just find it so difficult to get a hang of using the Turbo Fryer. Though many reviewers do agree that if you get it right its a more healthier cooking option. But sadly not suitable for bigger families.

You are limited to making a smaller 6 to 10 inch pizza, nothing bigger than that at that too just one.

More of a Snack Maker

Though the Power XL Turbo Fryer is a versatile cooking appliances you cannot use it to cook all the meal at one. You have to cook in batches. The Turbo Fryer just does not have the enough space inside to cook a variety of items simultaneously. You can cook your min dish in the Power XL Turbo Fryer but for the side dishes you would still need other appliances. Many users conclude in their reviews that this (Power Fryer) is more of a snack maker than a complete meal maker.

The Power XL Turbo Fryer has a very short cooking time for most of the items, the cooking time is very different from than other cooking appliances and hence a wrong judgement can cause the food to overcook. A difference of a few seconds can turn your food from crisp to dried out. And that is why you have to monitor it constantly, thanks to it see-through glass which facilitates this.

One reviewer points out in his review that since the Power Fryer uses convection cooking method without oil, the inside of the chicken does not become juice. He further mentions that it is the oil that makes the interior juicy. So no matter which air fryer you use, you should not expect “deep frying” like quality.

Based on the reviews we conclude that Power XL is an made in China overrated, over-hyped, unreliable air fryer (TURBO version)  that is not worth the price if you are looking for a family sized air fryer.

There is an inherent difference between air frying and deep frying and we are for centuries used eating deep fried food, that deep-frying cooking method is what gives the food its taste. When you move to air frying, something’s gotta give. And this is true with all Convection Ovens and Air Fryers. We are not demonizing the Power XL Deep Fryer, the “air frying” is certainly much healthier cooking option than deep-drying. But the manufacturers of Power XL Turbo Fryer make it look like a magical kitchen appliances where you are going to get taste as well has oil-less food, this is just not possible. Compare the Turbo Air Fryer with the Air Fryer here.

Buying an air fryer is still an healthy option and there are lots of branded fryers out there in the market. Just skip this Turbo Fryer.