Compare What is it? Power XL Air Fryer Grill vs Nuwave Bravo XL

Between the two, the Power XL Air fryer Grill came first and has the functionalities of eight appliances hence it boasts of being a “8-in-1” cooking appliance. PRIMARILY, PowerXL is an “AIR FRYER” with the secondary added functionalities of a Grill, Rotisserie, Bake, Roast, Pizza, Reheat and Toast/Bagel. 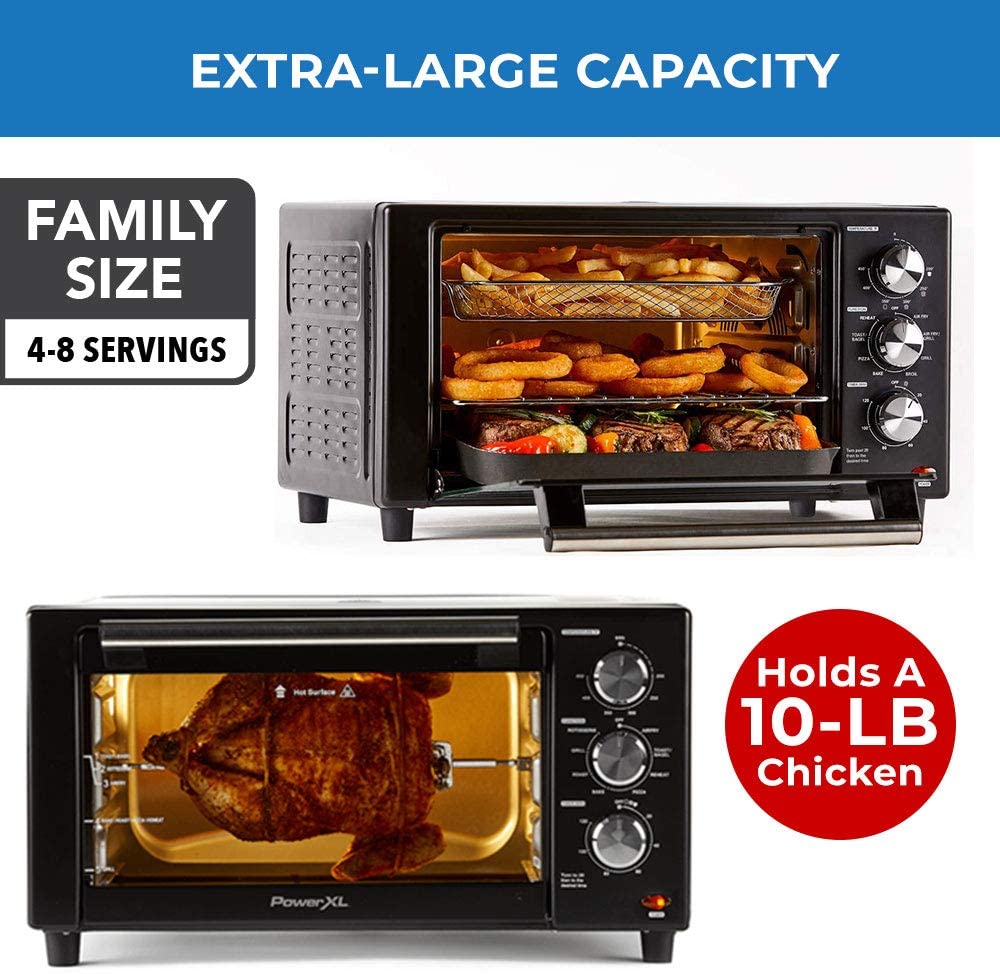 So “how does the PowerXL Air Fryer become a GRILL?” you may ask? the answer is the High density non-stick grilling plate that it comes with. The high ridges of the plate claim to give the grill marks similar to those you would expect from an outdoor charcoal grill.

Both the Power XL Air Fryer Grill and the Nuwave Bravo XL use the traditional conduction method and the more recent convection method for cooking. While conduction is the most basic of the cooking methods, it is convection that is a game changer. Now you may ask if both the appliances use the same “convection” method of cooking, what’s the difference in them? well, the number of heating elements and the internal volume make all the difference, this is explained in the next comparison section.

As mentioned earlier PowerXL is an enlarged “Air Fryer” and air fryers need to have compact chamber to air fry thoroughly. Essentially unlike ovens, air fryers are meant to cook [air fry] smaller portions of food and that too FASTER than ovens. The manufacturer of the PowerXL Air Fryer Grill have tried to create a BIGGER Air fryer which could cook [again air fry] food for the complete family and do it quicker than an oven. They try to achieve this by placing a bigger fan with peculiar blades to match the increased cooking volume.

Nuwave Bravo XL OVEN scores in the areas of quantity of food. If you have bigger family Nuwave Bravo is better than PowerXL.

Nuwave Bravo XL Oven also has an edge when it comes to “even cooking”. Undercooked food is a problem with the PowerXL Air fryer Grill.

It has a sleek 8-in-1 design made to facilitate cooking huge quantity food. It performs functions of multiple machines singlehandedly. Its design features two racks in which different ingredients can be placed separately for cooking in one go. However, its 930 cubic inches size is relatively smaller, which acts as a limitation.

Brushed stainless steel for exterior, heat-resistant tempered glass door and robust cooking racks highlight the design of the Nuwave Bravo XL. Its design features four rack and pan positions for increased flexibility in cooking. It’s a compact appliance that saves counter-top space and yet cooks for many people.