What is Blue Diamond Grill Genie?

Grill Genie is an exceptional cooking pan that guarantees making grilling, cooking and performing a variety of tasks a breeze. It comes with features like exclusive ceramic non-stick coating that lasts ten times longer. 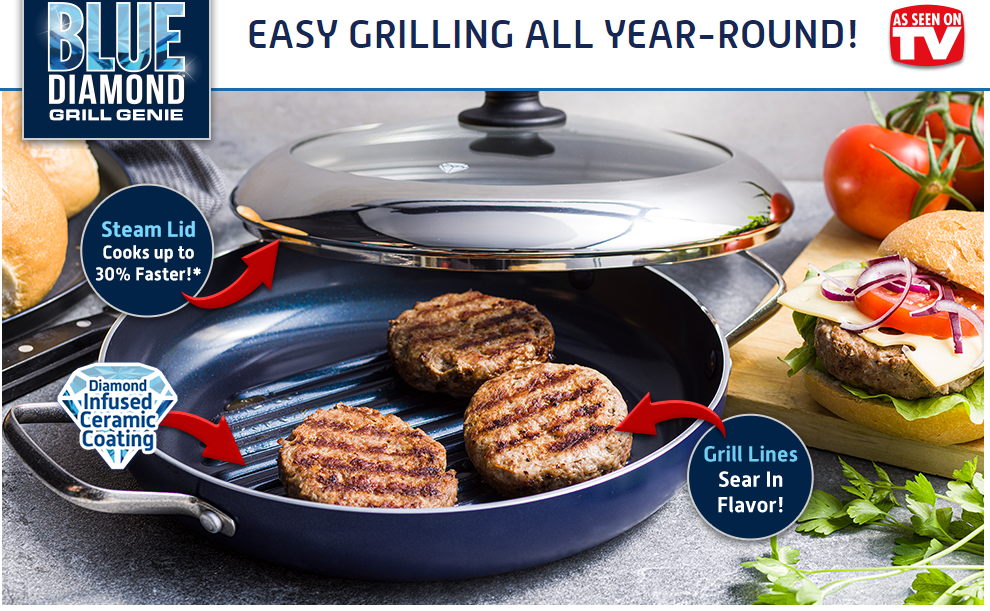 As the name suggests, Grill Genie is a pro at grilling, which is its most notable highlight. The pan features an extra-large 11” cooking surface, which allows it to cook large quantity of food. It is also well-known for:

Grill Genie Claims to be Lightweight, Easy to Clean

Grill Genie boasts of exceptional advantages that make it a pan par excellence. It is compact, lightweight and easy to store. It is also easy to clean as it is dishwasher safe and is very simple to use. Further, it is toxin free since it does not contain PFAS, PFOA, lead or cadmium. It is oven and broiler safe up to 850 degrees, which makes it a popular choice for customers.

Overall, Grill Genie, according to most customer reviews, is not bad, but it is definitely overpriced. While its pot holders are not up to the mark, quality and efficiency-wise, it does a good job. It is easy to clean, and the feature of steam vented to the lid is very useful.

Grill Genie is also noted for imprinting fantastic grill marks on the food it cooks, although the marks should be imprinted deeper. Its non-stick feature is also considered really good.

Further, Grill Genie manages to reduce splattering and releases steam as shown in advertisements. It can also be used in the oven at 450 degrees without any worries. However, customers refrain from keeping the lid in the oven along with the pan as they’re not too sure if they can do it.

Good for Hot Dogs and Steaks

According to a reviewer, Grill Genie can be used for preparing hot dogs and steaks as it simplifies the function of grilling greatly. He says he was amazed at the authentic-looking grill lines it creates on hot dogs and steak the first time he used it. He also loves the way the preparations made in Grill Genie taste.

At the same time, he emphasizes on sticking to the temperature settings and directions to get desired results. Another advantage of Grill Genie is that it’s very easy to clean even without using the dishwasher. Its lid is made of metal and has tiny holes on it, which retains the heat inside and let condensation escape for better results.

Other users say that they also use this Skillet to prepare a whole meal. They’ve used it to make quartered carrots, potatoes and other foods in it and got great results. Some have also tried making pizza in it. Most of them recommend using a flat bottom skillet for pizza with just a smidgen of oil since it does a fabulous job of browning the bottom crispy.

One drawback of the Grill Genie is that its handles become too hot while cooking. Further, its silicone pot holder does not provide a form grip on handles, which makes things trickier. A number of customers are impressed with its performance, but its handles turning very hot is a dampener. Some users have been caught unawares while using the pan. They got blisters on their fingers as they had no idea that its handles get heated so fast. They say they learnt the hard way to use mittens and other things provided with the pan.

However, some users say that the mittens are uncomfortable to use while cooking. It has compelled them to try out other alternatives instead as a defense mechanism against overheated handles. Most customers feel that the makers of Grill Genie must warn buyers about the handles and explain how the silicone items provided with the pan are used.

GrillGenie.com does what it Claims

On the whole. a large number of customers are overall happy with Grill Genie. Several customers appreciate the large cooking surface the pan has, and how easy it is to clean it after use. Many recommend using the vented lid to cook food like meat faster and get even better results. At the same time, they really wish its handles were cool to touch during and after cooking. If it was, most customers say they would’ve given it five stars.

A number of customers admit they’ve found Grill Genie to be unexpectedly resourceful. They say they are able to cook almost everything in it, right from frozen meat to cheese sandwiches and more. Some of the recipes can be made with minimal butter and oil, and still taste great. Grill Genie is really easy to use and clean too. Further, it is lightweight and easy to store.

Not for Induction Stove

Although Grill Genie is a versatile cooking implement, its base is not suitable for glass stovetop. One cannot use it on induction stove, so that’s a limiting feature customers have to adjust to.

Although the lid of Grill Genie has an interesting concept, it does have certain limitations. It is made of very thin stainless steel and is rather fragile in quality. It can get twisted and loses its shape over a period of time.

Does more than Grilling

Be the first to comment on "Grill Genie Review | Does GrillGenie.com Work?"