What is Food Genie? 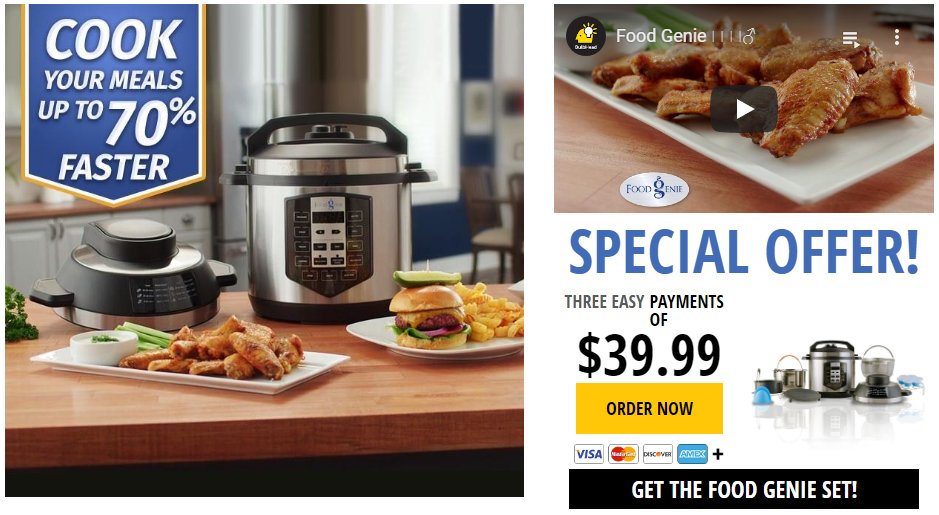 How does Food Genie Work?

Food Genie works as an Air Fryer as well as an electric pressure cooker. But it does not work as both the machines at the same time. The secret is in the lid, the Food Genie comes with two lids which make it an “air fryer” and a “pressure cooker”.

Food Genie as a Pressure Cooker

An airtight lid traps the steam inside the Food Genie cooker and the pressure generated by the steam forces the moisture inside the food making it cook from the inside. The promoters of Food Genie claim that their cooker is so efficient that it can pressure cook even ribs.

The air fryer works on the principle of Convection cooking. An air fryer lid which has a fan and heating element, circulates hot air inside the cooking chamber which makes the food crunchy. The perforated air fryers basket brings the food in contact with hot air, cooking the food from all sides. Once you pressure cook the food, it’s time to make your food crunchy. Just change the pressure cooker lid with the air fryer one and the ribs turn brown and crispy, as per the promoters review.

Why is it called Food “GENIE”

Because it can be used like a GENIE to make all your favorite foods. So, what does the Food Genie do? after all? The Food Genie claims to do following cooking functions:

Accessories/Parts of the Food Genie

Some customers who’ve used Food Genie have expressed sheer disappointment with its performance. They have posted several complaints that state that this air fryer has failed miserably on several fronts. To begin with, its design is not at all up to the mark; its basket is was too small. The appliance does not have any advanced features. You have to do a lot of tasks like stirring, tossing and moving the ingredients manually in the appliance yourself. Also, a number of food items don’t turn up crispy but get too dried in it.

Not Worth the Price

One of the users has written in her review that she expected Food Genie to be better than the other appliances she’s used. However, she found it to be no better than her toaster oven of the same size and equal specifications. She’s regretting spending money over this appliance, which she feels isn’t doing anything exceptional.

One more customer has said that ‘super-hyped’ appliances like Food Genie or some others like the Instant Pot or pressure cooker come with their own set of limitations. According to her, while these appliances look fantastic and do have some advanced features, it’s not necessary that they will cook the way you expect them to. She says that traditional appliances and methods of cooking seem much better to her. They may take a little more time and demand more effort, but nothing beats the way they stir up your favorite recipes the traditional way.

Another customer has written in that she tried using the Food Genie as a slow cooker with its optional glass lid. Although it prepared a decent meal for her, she thinks it is not in any way as good as an authentic slow cooker. Food Genie may look appealing and claim to weave magic, but it’s not an uncomplicated appliance. You need to have patience to get used to cooking in it. It takes time to understand the mechanism and nuances of such ‘exotic’ appliances and one cannot really take a chance or be laid-back while using them.

Some common issues you tend to face while using an air fryer or some of the other ‘sophisticated’ appliances is their functionality issues. For instance, you may not get the exact cooking time right, nor be able to gauge functions like steam release time and exact duration of heating. You may be expecting your new appliance to cook your food real quick as it’s ‘instant’, but the reality could be the opposite. Whatever claims are made by their manufacturers about cutting down your cooking time by more than half are completely false. This is a complaint that is posted by quite a few users, who buy appliances thinking their cooking woes will be gone, but actually don’t.

A user in his review of Food Genie has complained that the appliance is far too small. It can cook for just one person but not the entire family. One will have to actually use it a number of times if the family is big or if there are visitors to feed. It can prepare very few chicken wings or fries. He’s said that that same goes for appliances like Instant Pot.

Too Much of Hassle

The problem is that such machines are so small that they cannot process foods properly. As a result, things don’t turn out as crispy as you want. You have to put in extra effort, such as pressure cooking or slow cooking food beforehand and then using your newfound appliance. Carrying out the entire procedure, including keeping your pressure cooked/ slow cooked food inside the appliance like an air fryer and placing its special lid on its top is a task.

Other issues that reviews of this appliance have pointed out are lack of proper display and inconsistency in cooking. A common complaint about using it is that one has to strain her or his neck to read what’s displayed on the screen as it’s positioned too low. Lack of clear instructions is also a problem that quite a few users have mentioned. In fact, it gets so stressful sometimes that trying out a new recipe becomes a source of worry. There’s every chance that something will go wrong despite doing everything you can. Using an air fryer or other ‘state-of-the-art’ appliances, therefore, is not easy as you can’t rely on the claims sellers make to sell their product.

The Food Genie is priced at $119.99 + $14.99 S/h which is quiet cheaper (by 67%) compared to other similar “Electric Pressure Cooker and Air Fryer” Combos. The Food Genie is available only at the official website GetFoodGenie.com. The company behind Food Genie is Telebrands. Food Genie does not have any warranty and comes with a 30-day money back guarantee. 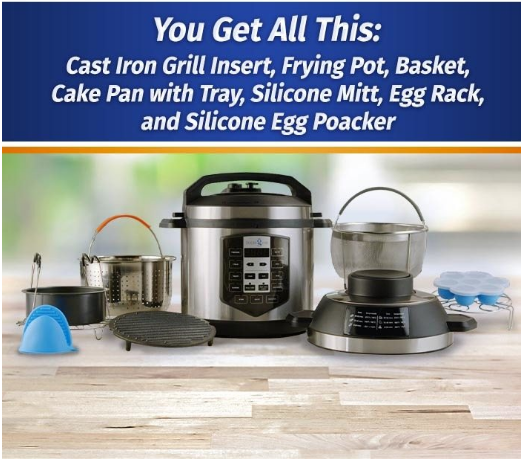 Our Verdict on the Food Genie